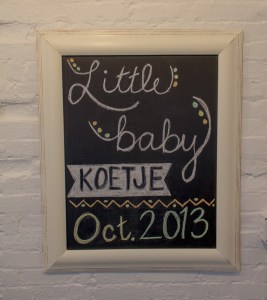 When we found out we were pregnant, I knew I wanted to do a chalkboard and a blog to document everything for me as well as keep our family up to date with everything and feel involved.

So to start out, I thought I would post our story on how we decided to start a family, the adventure we have been on, and how we found out this amazing news; the main reason being, I don’t want to forget any of it!  I will do another post with how and when we told family.

In August 2012, we were living in KS, been married about 3.5 years, had a puppy and a house we were about finished remodeling.  We had discussed starting a family for just about the whole year.  Earlier in the year, Wes took me on a nice date to the Cheesecake Factory and walk around the Plaza and told me he felt ready and wanted to start the discussion of having a family.  So in August, we both decided it was time and started trying to get pregnant.  We had no luck and that is when God gave us a surprise we were not expecting… a move to GA!  At the end of Sept, we went to interview for a new job God had put on Wes’ heart at Rock Bridge Community Church in Dalton, GA.  We were offered the job at the end of the interview and after much prayer, we accepted on the drive back to KS.  We got home and immediately started figuring out how to move cross country yet again.  We put the house up for sale the first weekend of October and Wes started his new job on the 20th, which left me and Simba in KS to pack everything up and sale house.  With God on our side, we had an offer on the house the Friday before Thanksgiving.  We had already decided I would move in with my parents over Thanksgiving so I could be closer to find a place to live in GA and be around family for the holiday season.  We closed on the house December 17th and found a place to live in GA.  We signed a 9 month lease since we were wanting to look for a house as soon as we could and that was the shortest lease they offered.

After 10 weeks and 5 days, I moved to GA the weekend after Christmas.  We had really not discussed starting a family with all that was going on with the house, a new job, and settling into our new apartment.  Towards the end of January, I started not being able to sleep.  I would wake up around 3am and just lay there, not awake really but not tired and just had a racing mind.  After about 3-4 nights of this insomnia, I was laying in bed Friday the 25th.  Wes woke up around 7 and we started talking, especially since I had been up since 3am.  I mentioned to Wes that I think I may be pregnant.  I didn’t really have anything to go on, but that is where my mind kept racing to in the wee morning hours the last few days.  Wes responded with, “I think you may be too.”  I asked him why he thought that and he just said he had a feeling as well.  So I got out of bed and took the test.  It was an immediate positive, no question and no waiting to find out!  So I kept my squeal inside and washed my hands.  I took the test into the bedroom where Wes was laying there reading his phone.  I showed him the test and he said “what does that mean?”  I responded with a huge smile and said “Well, I wouldn’t show you a negative.  It means we are pregnant!”  Wes sat up and smiled.  He said “I thought so.”  We both giggled and I think we were both in a little bit of disbelief.  Yes we had tried months prior with no luck, but it wasn’t really on our minds nor talked about with everything else going on in our life.  We spent the day just hanging at home since Friday is Wes’ day off.  I started reading a bunch of stuff online and doing the calculators to find out my due date.  I also called the Dr. and set up our first appointment to confirm the pregnancy.  According to the calculators, I knew I would be due sometime in early October, but I couldn’t really pin point the date.  We had our first appointment that Wednesday, January 30th.  I asked a lot of questions and they said they put me at 5 weeks 1 day already and I was due October 1.  I couldn’t believe I was that far along already.  When we got home I looked at the calendar and realized the irony God had placed in our lives.  We had a shorter lease that will end September 30th and we are due October 1!  Between that and everything else that was happening in our life, Wes and I could not help but laugh and just say, “God is writing a story here!”